The portraits of Charles Causley we use on all our sites were taken by Bob Tilling. His 1979 black and white portrait of Causley was accepted into the National Portrait Gallery collection in 2010.

Robert Tilling MBE R.I. was born in Bristol in 1944. A great friend of Charles Causley, he was a frequent visitor to Cornwall. Several of Bob’s paintings hang in No. 2 Cyprus Well. After Charles’ death in 2003, Bob was an irreplaceable member of the Charles Causley Trust, tirelessly working to preserve the poet’s house in Launceston for posterity and as part of Cornwall’s heritage.

It was characteristic of Bob. His energy for the arts and their importance was boundless. He was a fine painter, elected to the Royal Institute of Painters in Water-Colours in 1985 and exhibiting widely including at the RA and RWS. His characteristic style was an abstraction from landscape forms. His tremendous response to Causley poems such as ‘Myth’ and ‘At St Hilary’ in Twenty-One Poems (1986) and to Causley’s translations from the German in Schondilie (1982) are fine examples.

But Bob’s artistic abilities were not only with paint. His photography, though informal and as yet not exhibited, was a delight to his friends. He played good blues guitar, wrote many jazz reviews, lectured, performed, and taught blues technique in the United States. He brought blues singers over to perform in Jersey and wrote a book about blind bluesman Rev Gary Davis, first published in 1992 and reissued, updated, in 2010. Bob was a generous-spirited man, a constant encourager of others, as teacher, friend and arts administrator, a vibrant artist, a lover of life. His 2006 MBE was national recognition of this. Robert Tilling died in 2011.

Bob’s dedication and drive to see the Charles Causley’s House project become a reality are enormously appreciated, and he is remembered with immense fondness and very greatly missed. 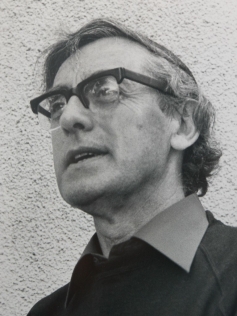 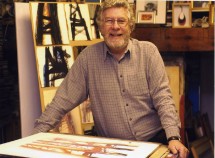 Bob Tilling in his Jersey Studio 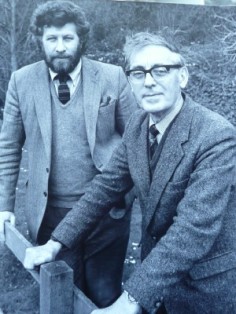 A seascape by Bob Tilling, hanging above Causley’s desk

On one of the first early mornings of the restoration, Bob Tilling’s Beach Scene is put back in place, above Causley’s armchair

Bob’s picture with Charles, in no. 2 Cyprus Well, July 2014. It is now part of the House’s permanent collection.

Charles Causley at The Poetry Archive